New group in Dallas holds protest for peace in Korea 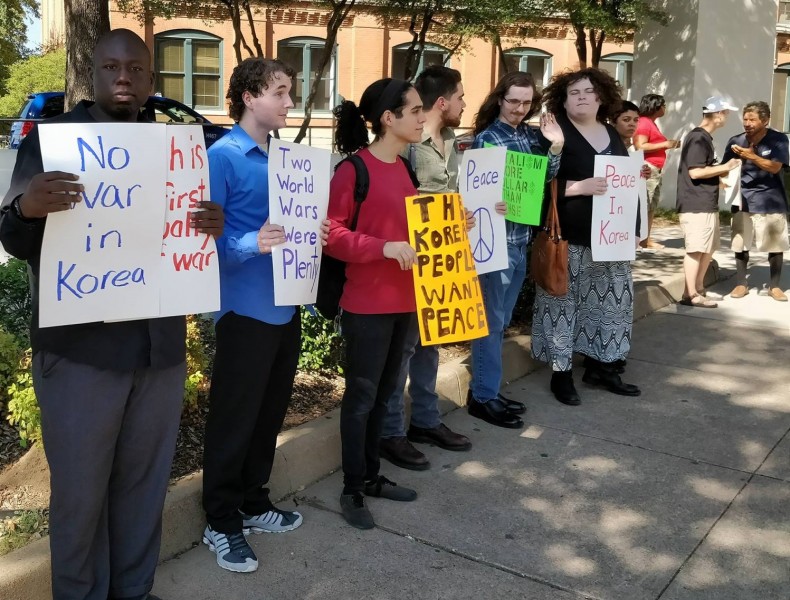 Dallas, TX - About 20 protesters gathered at the Grassy Knoll near downtown Dallas. Oct. 14, holding signs and chanting to demand peace with Korea. The action was organized by the Dallas Community Action Committee (DCAC), a new organization in the city. It was also endorsed by the Dallas Peace and Justice Center, North Texas Veterans for Peace, Code Pink, and the North Texas Light Brigade. Several socialist groups also attended.

Protesters held signs reading "Peace in Korea" and "Two world wars were plenty." At one point the group broke out into chants of "We want peace. How about you? North Koreans are people, too."

Several speakers addressed those assembled. Dan Sullivan, speaking on behalf of DCAC, said that in the group's view the threats of war in Korea were against the interests of most Americans and served only the interests of the one percent. A speaker from Veterans for Peace read an open letter the group had sent to Donald Trump and Kim Jong Un calling for both sides to step back.

Cassandra Gemini, speaking on behalf of Freedom Road Socialist Organization, said that in her view north Korea's nuclear arsenal was a logical response to U.S. aggression against Iraq and Libya. "They have nukes so that the U.S. won't do to Korea what it did to Libya and Iraq - destroying their countries and murdering their leaders," she said.

“The Damned Don’t Cry: Pages from the Life of a Black Prisoner and Organizer”

Resistance is key: The 2010 FBI raids on anti-war and international solidarity activists